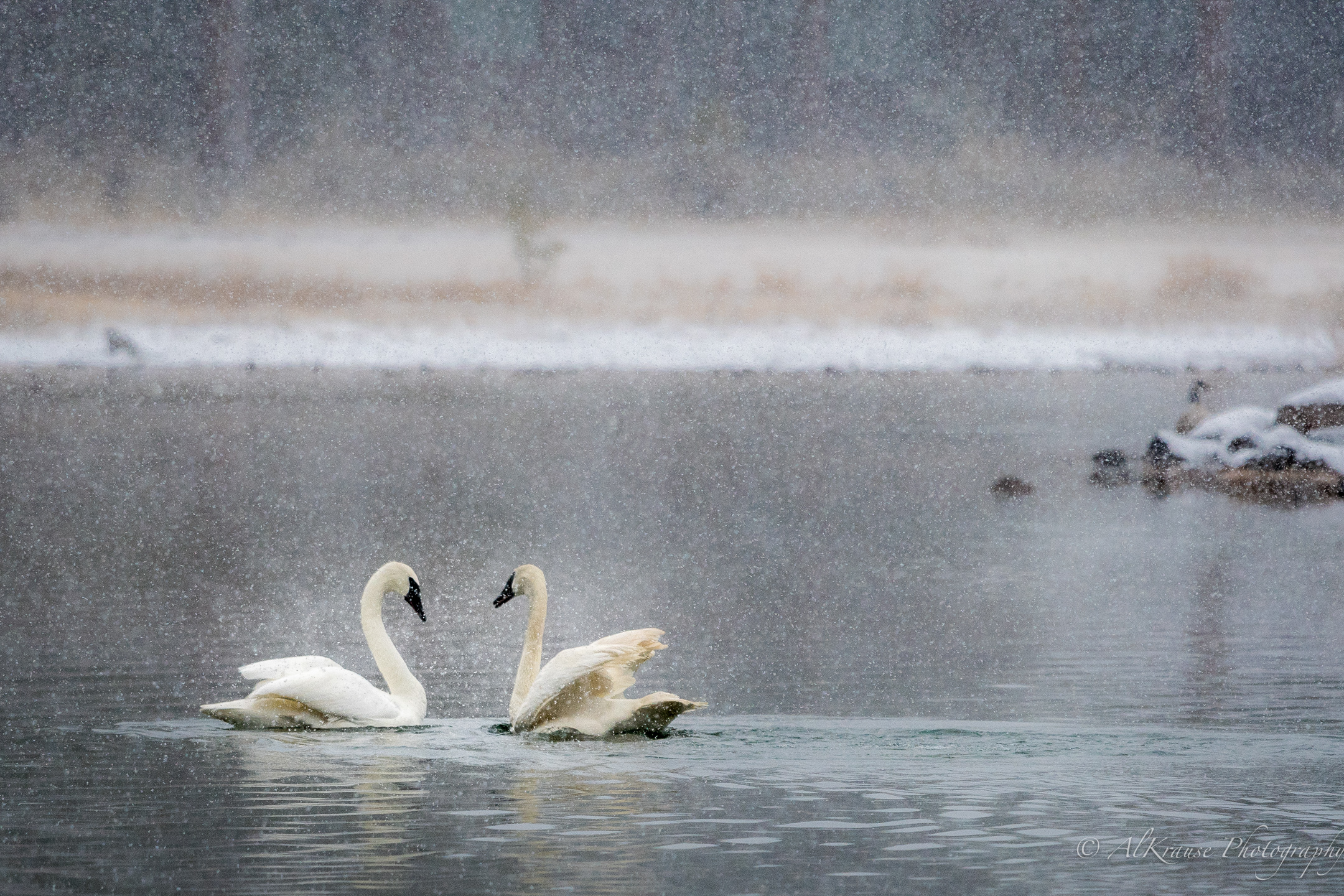 SCOTLAND NECK, NC – A rehabilitated Trumpeter Swan from Sylvan Heights Bird Park has a beautiful new home in Oregon – and he’s on an important mission. The male Trumpeter Swan, now known as “Bob”, recently joined his new mate “Eloise” at the Aspen Lakes community in Sisters, Oregon. Eloise lost her former mate, “Pete”, in January to a bacterial infection. The pair had been prolific breeders, raising 15 cygnets that were released into the wild at Oregon’s Summer Lake Wildlife Area as part of an effort to boost the region’s dwindling Trumpeter Swan populations.

Once widespread across North America, Trumpeter Swans had nearly disappeared from the U.S. by the late 1800s as a result of intensive commercial hunting. For nearly two centuries, swan skins and feathers were considered fashionable as powder puffs, coat linings, hat ornaments, and quills. During that period, hundreds of thousands of swans were harvested and shipped to European markets until the Migratory Bird Treaty Act of 1918 finally provided legal protection for North America’s birds. Since then, conservation initiatives allowed Trumpeter Swan populations to recover across some of their historic range – but the Oregon population has struggled to rebound.

Eloise and her former mate, Pete, had been one of the program’s most successful breeding pairs. Sylvan Heights Bird Park sent Pete to the Aspen Lakes community in 2018, and the pair instantly bonded. They raised one cygnet in their first season together, and an astounding eight cygnets in their second year. Within three years, the pair would contribute 15 cygnets to the Oregon Trumpeter Swan Restoration Project until Pete’s death last winter.

The Trumpeter Swan now known as “Bob” arrived at Sylvan Heights Bird Park in 2019 from a rescue organization in Wisconsin. He had been found with an injured wing, and was deemed non-releasable as a result of his condition. Bob was initially paired with a mate at Sylvan Heights Bird Park, but the pair never fully bonded or produced offspring. However, his injured wing improved substantially under the care of Sylvan Heights aviculturists, and when a wildlife rehabilitator from the Aspen Lakes community in Oregon reached out to Sylvan Heights after losing their beloved male swan, Assistant Director Ali Lubbock knew that Bob would fit the bill. “He was an ideal match for Eloise, as he had shown no interest in our female, but there were possibilities for him at Aspen Lake”, says Lubbock. “The lake is much larger than our area, and more like his place of origin, so we felt there was a good chance of him bonding with Eloise.”

Escorted by an Aspen Lakes volunteer, Bob the swan traveled on a commercial flight from Raleigh to Oregon in February, and is settling in well at his new home. Sylvan Heights staff hope that Bob and Eloise will continue to contribute to Oregon’s wild swan population for many years to come.

Located in Scotland Neck, N.C., Sylvan Heights Bird Park is internationally recognized for its contributions to waterfowl conservation, avian husbandry and avicultural training. Open since 2006, the 28-acre facility is also a significant driver of local economic development, annually receiving more than 50,000 visitors. In conjunction with its adjacent Sylvan Heights Avian Breeding Center, the bird park encompasses the largest and most biologically significant collection of waterfowl in the world. Sylvan Heights also serves at the headquarters of the International Wild Waterfowl Association, a group dedicated to preserving all 234 taxa of wild waterfowl. For more information, visit Sylvan Heights Bird Park’s website at www.shwpark.com.