The opening of Sylvan Heights Bird Park in 2006 emerged from the legacy of one man – Mike Lubbock, affectionately known to many as the Waterfowl Man.

His landmark work resulted in 17 World First Breeding Awards, plus 15 awards for first breedings in North America—an unsurpassed accomplishment. Most importantly, his primary focus in breeding waterfowl is to assure the survival of those species that are disappearing in the wild, and those in peril even in managed collections around the world. Several prominent naturalists claim that without the dedicated efforts of Mike Lubbock and the staff at Sylvan Heights, a number of waterfowl species would already be extinct today.

Mike Lubbock is Executive Director of Sylvan Heights Bird Park and Founder of Sylvan Heights Avian Breeding Center, organizations dedicated to the survival of the world’s waterfowl species. Mike serves on the Board of Directors of the International Wild Waterfowl Association (IWWA) and is also Vice President of the Carolinas/Virginia Pheasant & Waterfowl Society as well as the American Pheasant and Waterfowl Society.

Mike Lubbock’s career in ornithology began at the prestigious Wildfowl & Wetlands Trust (WWT) in Slimbridge, England, where he held positions as Curator and Director of Aviculture. Lubbock continually developed and improved waterfowl propagation techniques and did a extensive amount of field research expeditions in some of the world’s most remote natural habitats.
The ultimate goal of establishing his own avian collection became a reality in 1985, upon arriving in North Carolina and founding Sylvan Heights Waterfowl Center, now the largest and most biologically significant waterfowl collection in the world.

In addition to receiving 17 World and 15 North American First Breeding Awards, Lubbock was inducted into the International Wild Waterfowl Association’s Hall of Fame. He is also a recipient of the Jean Delacour Avicultural Award. This special honor was given to Mike Lubbock at the 2000 IWWA convention along with this introduction:
“Mike Lubbock’s avicultural accomplishments on both sides of the Atlantic are legendary. He has brought many new species and new bloodlines in from the wild. He has accomplished many first breedings and he has been a source of bird and breeding advice to many.”

Mike’s passion is focused on the global preservation of threatened waterfowl, actively pursuing many conservation efforts worldwide. He assisted in organizing the Venezuelan Waterfowl Foundation, which provides fieldwork and educational support for the preservation of the Torrent Duck, Orinoco Goose and Merida Teal. He is also a member of the Brazilian Merganser Recovery Team, developed under the WWT’s Threatened Waterfowl Specialist Group to preserve the critically endangered Brazilian Merganser.

Mike Lubbock also marshaled interest in the White-winged Wood Duck Species Survival Plan at a time when there was little happening to preserve this perilously endangered bird. Today, nearly 1/3 of the world’s White-winged Wood Duck population resides at the Sylvan Heights Bird Park. Lubbock continues to work with wildlife organizations to restore the wild populations of this bird in Sumatra and Cambodia.

The legacy of The Waterfowl Man continues through The Sylvan Heights Bird Park in Scotland Neck, North Carolina. Lubbock describes his definitive mission this way: “The Park is designed to educate people about waterfowl and the importance of preserving them. Our goal is to tell visitors the story of every species–where it comes from, what habitat it prefers and why the species is important to our world. Visitors are also immersed into a wetland setting, so the feel and scope of a primary waterfowl habitat can be fully experienced.”

Mike Lubbock was invited to a workshop in Brazil to address the dire situation of the Brazilian Merganser, one of the rarest of all birds. The workshop was organized by Wolf Bartman, of the Dortmund Zoo in Germany, and included experts from around the world in the field of wild and captive waterfowl management.

Working in cooperation with the Akron Zoo, the American Zoological Association and other partners, Mike Lubbock helped to form the Venezuelan Waterfowl Foundation. The Foundation focuses on the conservation of the Andean river systems and is dedicated to the conservation of waterfowl in Venezuela, including the illusive Torrent Duck and the Orinoco Goose. Mike visited Venezuela in 2000 and again in 2002 to monitor progress of the studies in the wild and hopes to return in the near future.

In accord with Mike Lubbock’s advice, a successful financial investment manager and private waterfowl breeder made the decision to purchase two pristine islands in the Falkland Islands chain in the South Atlantic. Grand and Steeple Jason Islands are the world’s largest nesting grounds for the Black-browed Albatross. These islands are also home to many other rare birds such as Falkland Island Steamerducks, Magellanic Geese, Kelp Geese and three species of penguins. Because of the highly significant marine and animal habitat existing on these islands, the owner eventually gifted them to the Wildlife Conservation Society for their protection into the future.

Collaborated with the U.S. Fish and Wildlife Service and Ann La Bastille on an expedition to Guatemala. The goal was to set up a captive breeding program for the last of the Atitlan Flightless Grebe. Unfortunately, the species was already extinct as a distinct form due to hybridization with the Pied-billed Grebe.

Served Her Royal Highness in overseeing the bird collection at Buckingham Palace and Sandringham Estate.

Part of expedition to Botswana sponsored by the National Zoo/Smithsonian Institute to collect stock for the first captive breeding of African Pygmy Goose and Maccoa.

Follow the adventures of The Waterfowl Man as he evades danger on his mission to protect the birds he so urgently pursued in the wild. Mike Lubbock traverses rivers, jungles, and ice flows; faced hazards on multiple continents, endures plane crashes and shipwrecks, all to give waterfowl a chance to survive in a world rapidly losing its wilderness places. 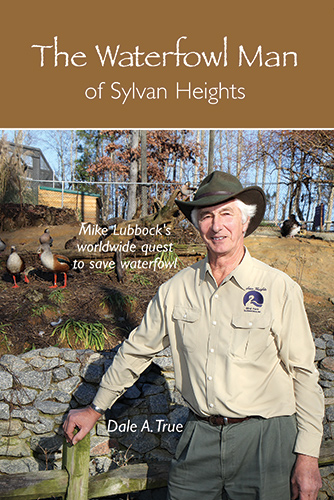